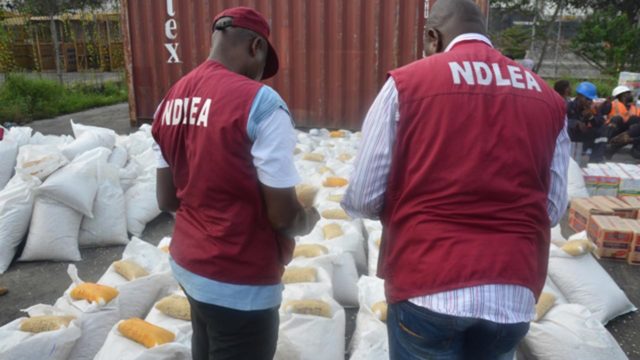 In the early hours of a humid November morning, a 16-car convoy rolled into Obinugwu village in southeast Nigeria and stopped outside the iron gates of a non-descript house.

More than 50 drug enforcement officials crept through the compound and surrounded the methamphetamine lab hidden by overgrown jungle behind the property.

The bust happened just before daybreak. Dozens were arrested, including the suspected kingpin at his mansion in the nearby city of Owerri.

Inside the lab there was 78 kilograms (171 pounds) of meth — a drug as notorious for its exhilarating highs as its life-destroying, addictive lows.

But the haul, worth tens of thousands of dollars, was not for domestic consumption.

Instead, it was probably destined for South Africa and Asia, investigators said.

Drug trafficking is nothing new to Nigeria, which has long been a transit point for cocaine and heroin going to Europe and North America.

The difference is that now Nigerians are producing the drugs.

With vast quantities of chemicals entering the country, porous borders and corrupt law enforcement, Nigeria is an ideal place to produce the drug.

Since the country’s first meth lab was discovered in 2011, authorities have found 14 more producing mass quantities of the stimulant, while seizures of the drug have jumped from 177 kilos in 2012 to 1,363 kilos in 2016.

“It (meth production) is on the increase, significantly on the increase. Meth today is a serious threat to Nigeria,” said Sunday Zirangey, NDLEA Special Enforcement Team commander.

Reliable data on meth production in Nigeria is hard to come by and seizures are small compared with global giants Mexico and Myanmar.

But evidence on the ground points to a much larger industry.

Nigeria’s estimated need for the stimulant ephedrine, which is used as a medical decongestant, is 771 kilos, according to a US State Department report on international narcotics.

Yet Nigeria imports over eight tons a year, with the difference suspected of either being used to produce meth or trafficked elsewhere.

Despite the risks of arrest and even execution for traffickers in Asia, the profits are irresistible in a country where the minimum wage is just 18,000 naira ($50, 44 euros) a month.

Last year, the fight for control of the lucrative South African market more than 6,000 kilometres (3,700 miles) away came to St Philip’s Parish in Ozubulu, a village in the southeast Nigerian state of Anambra.

Piles of trash line the dirt road leading to Ozubulu, where an endless stream of people hawk everything from adulterated fuel to plastic flip-flops.

But among the grinding poverty are huge villas with grand columns and intricate wrought iron gates — glaring anomalies in a region with epileptic power and disintegrating roads.

He wasn’t there but his father and a one-year-old child were among the victims. Details of the shooting remain clouded in secrecy.

Ozubulu has made headlines for drugs before. In 2015, the NDLEA busted a meth lab belonging to Ikejiaku Sylvester Chukwunwendu, also known as “Blessed Benita”.

He was charged with meth production and trafficking in the village.

“He’s one of the biggest kingpins we’ve got,” said state prosecutor Lambert Nor, who said some of Chukwunwendu’s couriers had been executed in China for drug trafficking.

As the popular US television series “Breaking Bad” showed, meth can be made by almost everyone in their own kitchen if they have the right ingredients and background knowledge in chemistry.

Cocaine and heroin, on the other hand, are bigger-ticket enterprises. They require land dedicated to plantations and a specific climate to grow the crop.

But Nigerians were paying thousands of dollars a week to Mexicans, Colombians and Bolivians to teach them a new form of production that pumps out bigger, purer batches of meth.

Two years ago, Nigerian authorities arrested four Mexicans from Sinaloa, the epicentre of one of the world’s biggest drug trafficking cartels and birthplace of the infamous drug lord Joaquin “El Chapo” Guzman.

Experts fear that as production increases, meth will find a domestic market like in South Africa, where “tik”  as it’s known on the street has been described as an “epidemic” and is the most abused drug in the Western Cape province.

But there is no easy way to stop the rise of meth in Nigeria.