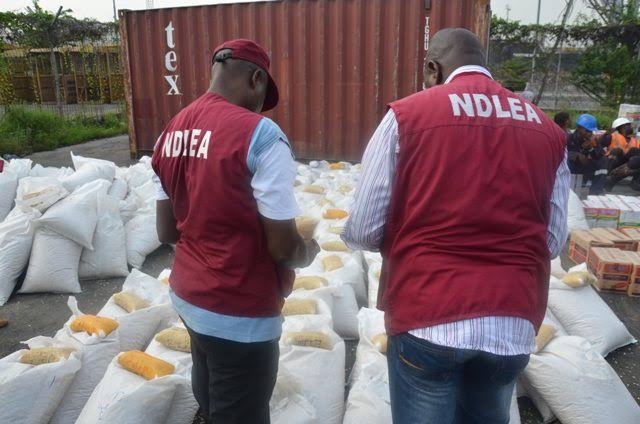 Akingbade disclosed this while taking newsmen round the drug production laboratory at Omenihu Street, off Enugu – Port Harcourt Expressway, Osisioma Local Government Area, near Aba. Diazepam is the generic name for a controlled sleep-inducing, anti-depressant drug, also called valium. He said that the company, which produced a brand of Diazepam, named DIZAPAM, was doing so without licence and in an unauthorised environment within a residential area.

Akingbade said that the company, without name, was operating in a warehouse and producing the substandard drug with the name of an Indian drug company, Shalina    Laboratories, PVT, India. The commander said the suspects were caught working in the laboratory when NDLEA men raided the warehouse.

He said that the owner of the factory, who is operating from Onitsha, Anambra, was on the run, while the agency had gone after him, after sealing off the warehouse. Akingbade said that the agency had been gathering intelligence on the illicit drug production for some days before it materialised in the arrests. “What they do here is compounding and making diazepam illicitly, because from the test that has been conducted, it proved positive for Diazepam but the production, registration is not controlled.

“So it is a clandestine laboratory. He has no number.   He has nothing to show government why he is producing the drug. “I want to add that Diazepam that is produced here is a controlled drug and if a drug is controlled, it means that it affects the central nervous system. “And the use or abuse of it can lead to addiction or general damage to the user’s brain. “It is a depressant and used for treatment of insomnia and anxiety. So we expect that it should not be produced by a single individual in this environment.” he said.

He promised that the man would be punished by the law when caught. Akingbade urged persons buying diazepam in Aba or the South East, to check and ensure they got the authentic one. He said it was suspected that some of the substandard products had been moved into the market.

He also urged residents in these areas, who had information on such unlicensed drug productions, to report to NDLEA for prompt action to save lives. Proper production of diazepam must go through registrations with Pharmaceutical Society of Nigeria (PSN), NAFDAC and permit from NDLEA. Also, it must be professionally prepared and produced in a verified laboratory with fully employed workers, who must be certified pharmacists.

The unlicensed laboratory is equipped with one big Lister generator, two packing and sealing machines, two tablet-making machines, one mixing machine and a dryer. There are also unsealed tablets with waste products from packaging littering the floor of the production rooms forming the laboratory, when newsmen visited the warehouse-turned laboratory.