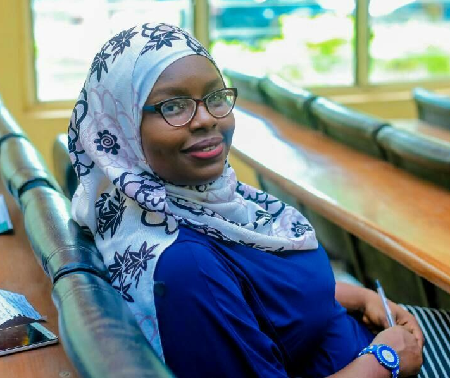 Aishat Oyinkansola Salisu, a final year student of the Faculty of Pharmacy, Olabisi Onabanjo University (OOU), Sagamu Campus, is the immediate past president of the Pharmaceutical Association of Nigeria Students (PANS), OOU Chapter. In this exclusive interview with Pharmanews, Salisu, who was, until her emergence as president, was the assistant general  secretary, PANS-OOU, shares her views on pertinent issues surrounding pharmacy education in Nigeria, as well as the major reason most pharmacy students prefer cramming during exams. Excerpts:

How did you come into studying Pharmacy? Has it always been your dream course?

Aside from the fact that Pharmacy is a profession I had always loved, there was a certain lady that I admired so much when I was in secondary school. Although she was my senior, I admired her because she was very brilliant. After she graduated and I checked the yearbook produced for her set, I discovered she picked Pharmacy as her dream course, and that was how my interest in Pharmacy developed and I promised myself I was going to study Pharmacy.

Moreover, the late Prof. Dora Akunyili was also one of the heroes I admired so much in the country, and when I carried out my research on her, I found out that she was also a pharmacist. That was when I made up my mind that it was Pharmacy or nothing else.

What were your motivations for contesting for the post of PANS president?

The trust that my colleagues had in me was what motivated me to run for the post of president. While I was still the assistant general secretary, I provided a mirror to every rest room in the faculty, as a fulfilment of the promise I made while campaigning. So, when it was time to have a new president, some colleagues came to me and sI should contest; that they believed I would do better in that position. And to God be the glory, I did not disappoint or betray the trust they had in me.

Can you tell us some of your achievements and challenges while in office?

One of my major achievements that I hold dear to my heart was my ability to ensure I did not betray the trust my colleagues and lecturers had in me, and each time I look back, I feel fulfilled and happy that I was able to write my name in gold.

Some of my visible achievements included campaigns against drug abuse, which we were able to do through several social medial platforms; improved relationship between lecturers and the students by extending our hands of appreciation to the lecturers through giving them welfare packages; erection of a landmark monument (the Rx statue) in front of the faculty building, among many others.

Our challenge however was lack of finance, as most of the dignitaries we reached out to either did not respond, or did not give much.

The Faculty of Pharmacy, OOU, produced the last PANS national president, at the same time you were the chapter president, what effect did this have on your administration?

Having the national secretariat in OOU during my administration was also a big challenge as there were some events we could not hold because the national constitution states that the host school cannot hold a PANS week or launch a magazine, which we adhered to.

I said earlier that there were a number of events we could not hold. This was because the Dean’s approval had to be obtained for every event. In fact, it got to the point thst she complained that we were seeking too much approval; so we had to drop some events we wanted to do.

How did you balance academic work with the stress of running the PANS office?

It wasn’t an easy task at all, but I am someone who understands how to strike a balance between whatever position I am occupying and my academic pursuit. I had a timetable I worked with, and I made sure one didn’t affect the other, especially my academic pursuit, which is the primary reason I am in the university. So, basically, I acted as president mostly during the day, and faced my studies squarely at night.

If you have had the honour of changing some things about pharmacy education in OOU, what would they be?

This shouldn’t be applicable to only OOU only, but pharmacy education in Nigeria as a whole. I will start with inconsistent syllabus. in Nigeria, pharmacy schools have different syllabuses they work with and its quite worrisome, as even pharmacy students in the same level in different pharmacy schools are not taught the same thing. And when you see your colleagues in other schools who are in the same level with you discussing a topic you have been taught, it would be as if those students came from the moon.

Take Pharmacy Law, for example, there is a textbook we use here and you will see a student in another school saying he has never come across that book before. Having the same syllabus will even ease the job of our lecturers and help students to learn uniformly.

Again, there is a popular saying in pharmacy education in Nigeria, “If you don’t know it, cram it”.  This is as a result of the complexity of the scheme of work we use. I sometimes see pharmacy education in Nigeria sometimes as the survival of the fittest. A lazy, weak and unfit person cannot study pharmacy in Nigeria. Our scheme is so complex that, sometimes, one can’t comprehend all that we are taught; so, what we do is to cram so we can pass exams.

OOU is a multi-campus institution, with colleges in different locations. For example, the College of Health Sciences, under which the Faculty of Pharmacy belongs,  is in Sagamu, far way from the main campus in Ago-Iwoye, compared to other pharmacy schools who have their faculty inside the main campus, how would you assess pharmacy education here?

Education they say goes beyond the four walls of the class room.  Let me say pharmacy education in OOU becomes boring at times. It’s just the same thing we get to do every year. We are restricted to our campus in Sagamu with other health-related students. Just like other schools, we wish we can be together in one campus. There is much we can achieve together. Sometimes organising an inter-faculty competition is not visible.

What is your advice to female pharmacy students seeking to follow your footsteps in vying for PANS presidency?

My advice to any female out there vying for the post of president is for such to be strong and never give up because there will be a lot of people who may want to discourage her, just like how I was discouraged; but she needs to make sure she wins the trust of people around her.  She also needs to believe in herself that she can win and also do better in that position.